I tend to forge my own path. I was the first in my family to go to college. I got a masters degree, a PhD, a second masters degree, and, finally my dream job: a tenure-track position at a prestigious university. For 8 years, I was a professor, NIH-funded scientist, and sought after advisor. I led clinical trials and published over 90 peer-reviewed papers. I taught, mentored students, residents, post-docs, and junior faculty. I held national leadership positions. I led a team of bright and talented people doing, what often felt like, impossible health tech research. And I was right on the cusp of being tenured (i.e. I’d have job security until retirement). Then, I did something I thought I’d never do: I walked away from it all. I left prestige. I left my research, my team, and my mentees. I also walked away from a huge college benefit for my kids (70% off tuition at my university or 100% off if at a cheaper college anywhere in the country!). Not many people walk away from a highly-coveted academic position or from tenure they’re about to touch. If they do, it's for another university offering the same benefits, if not more. Instead, I left for a startup, where nothing is guaranteed. Say what?

Before starting my new job, I read an article in the New York Times. It was about economists leaving prestigious universities to join Facebook, Microsoft, Amazon, Uber and Airbnb. So, why are people leaving academia? A few reasons:

Impact. In academia, people wait too long for their research findings to change the world. Tech companies move fast to impact the world today. #wearenotwaiting

WHY DID I BECOME A PROFESSOR?

I became a professor and scientist to help people. I wanted to discover, understand, mentor, and have a profound impact. I wanted to help people live healthier and happier lives. For 15 years, I studied how to promote health. I built and tested health programs for people with diabetes. I wanted these programs to work and help as many people as possible. But they helped only people in my research trials, and no one else. Why? Because it takes 17 years for research findings to have any impact in the real world, if at all. That’s just — Way. Too. Long.

Before 2008, I delivered health promotion in the most low-tech ways, with flip-charts, printed materials, and people — like community health workers, dietitians and certified diabetes educators. But in 2008, I realized the world was headed in a different direction. As I held my first smartphone in my hands, I asked myself: “How can I use this technology to help people manage their health? And how can I do it more effectively and at greater scale?” Health apps were just gaining traction, and developing one seemed out of reach for me and my small team. So, we built a website instead.

We built Diabetes MAP, a website to help people stick to their medication schedule, and spent years studying it. But, what you won’t find in my research articles is all the challenges we faced building Diabetes MAP. It was complicated, delayed, and frustrating. My colleagues at other universities all agree: developing health tech in academia is slow and painful. It’s impossible to hire and retain the best and the brightest graphic designers, developers, and tech project managers. Some of the reasons for this:

They’re underpaid. Tech people can easily make six figures in the commercial world. In academia, you only make that much if you have a MD or PhD.

The environment stifles creativity. Tech people would rather work in creative environments and around like-minded people — in coffee shops or co-working spaces with others like them. Being bound to a cubicle from 9-5 doesn’t appeal to them, or anyone for that matter.

They want to use modern tools. Tech people expect to use the latest tools to get sh*t done. Tools like Slack, Trello, Basecamp, and Jira, instead of landlines, Outlook, or pagers (yes, these things still exist!).

Health tech innovations in academia are bootstrapped together, break, and have to be rebuilt over and over again. More headache, more expense, and more time… I came up with the idea of Diabetes MAP in early 2009, and it took 8 years to complete our research on it! In those eight years, there were 15 versions of the iPhone, the launch of the iPad, the launch of the Apple Watch, and multiple versions of Android and PC. In 2009, a website seemed innovative and worth our time and resources. But, by the time we built and rebuilt it (three times!), and learned if it worked, people had moved on. What might’ve engaged people in 2009 is obsolete today. Today, Diabetes MAP would absolutely be an app, and not a website.

Engagement (e.g. responding to a website or app by opening it, clicking around, and coming back) in academic-made technologies is low. We don't make technologies people want to use. It's not our skill set. It's not what we've been trained to do. To develop apps and websites people love, academics have to work with people who DO know how to use technology to engage people: Graphic designers. Software developers. Tech project managers. People who understand design, development, and engagement, but don’t necessarily know how to use those skills to improve health behaviors and health outcomes. We need to team up for the magic to happen.

I’m hopeful the academic landscape will change… but, I just can’t wait. Ten months ago, I left an academic dream job, a team of people and mentees I love, and a near-guarantee of tenure to join a health tech startup. Why? Because they’re a team of people who understand design, development, and engagement and want players like me on deck to help improve health behaviors and health outcomes. We’re using the latest technologies to make managing diabetes simple, awesome, cost-effective, evidence-based… and we’re doing it right now.

Early On The startup I work for is in NYC. I now travel to/from NYC one week per month, leaving my 2-year-old and 5-year-old at home in Nashville. I work at a co-working space in a small room with 10 other people. I no longer have a corner office with an executive desk, 3 computer monitors, a Herman Miller chair, an administrative assistant, or an army of people doing things for me at the drop of a hat. It’s a lot different. When I got back to Nashville after my first week in NYC, my husband wanted to hear all about it. “Well, I was the first in the office each day. Most get in at 10. The building’s water was out, so the toilets were plugged up. I went to the closest pharmacy to get a case of water and lugged it back to the team. Our tiny open space means we all get to listen to each others’ conversations, including contentious ones. And, finally, I have no idea what I’m doing beyond writing blog posts.” The truth is, it took time for me to adjust. Today Ten months later, I love what I'm doing. The pace is fast. The impact is faster, anecdotally and empirically. One Drop is the startup I work for. One Drop's products include a mobile app (One Drop | Mobile) with in-app coaching (One Drop | Experts) and a sexy glucose meter (One Drop | Chrome). One Drop is supporting the health and wellness of people with diabetes around the world. I was recently analyzing over 1 million pieces of raw data generated in one week's time, and hyper aware of the awesomeness of how that data landed in my lap, instantly. Just today, another user reached out to say he lowered his hemoglobin A1c from 14% (19.7 mmol/mol) to 6% (7 mmol/mol) in just four months. This is profound impact, but not unique. Favorable anecdotal feedback pours in, all. day. long. Such a gift! Another gift is doing science - just faster. We've generated 8 peer-reviewed scientific abstracts (4 in press), have multiple manuscripts under review, and much more on the way. At the recent Society of Behavioral Medicine meeting we reported people using the One Drop | Mobile app with and without One Drop | Experts have dramatic blood glucose improvements. The American Diabetes Association's 77th Scientific Sessions start this week. We'll be presenting exciting outcomes of an internal and external evaluation of the One Drop | Mobile app + One Drop | Experts program. The embargo lifts on June 10th, so stay tuned.

Two months after I left academia, a big box arrived at my doorstep. It was a gift from my former university. A wooden chair embossed with the university’s seal and a gold plate engraved with: “Wishing you the best from your colleagues.” It’s a chair given only after 25 years of service. I'm grateful for the thoughtful gesture. But, the chair is hard, uncomfortable, and reminds me of Diabetes MAP: another thing no one will ever use. 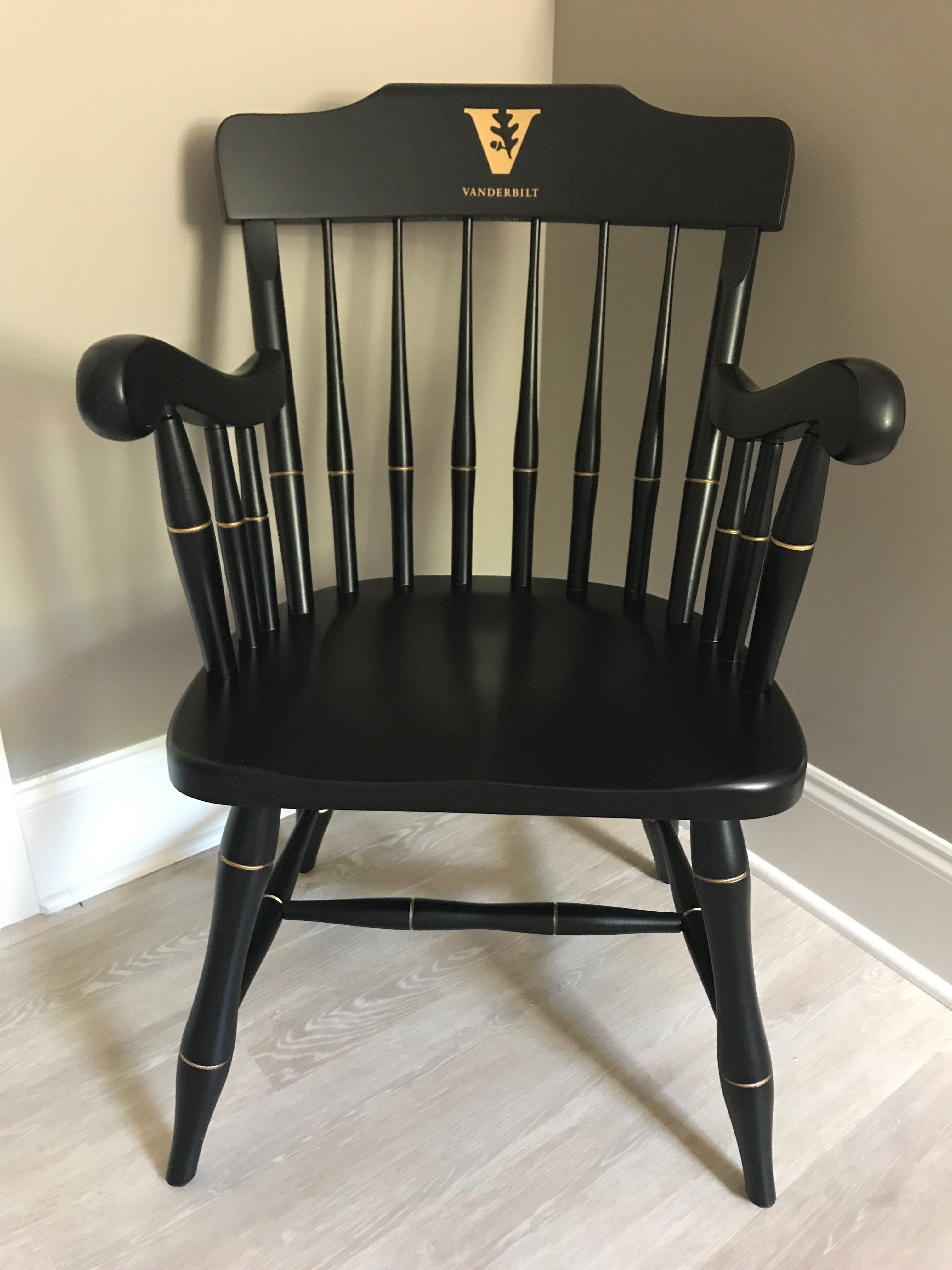